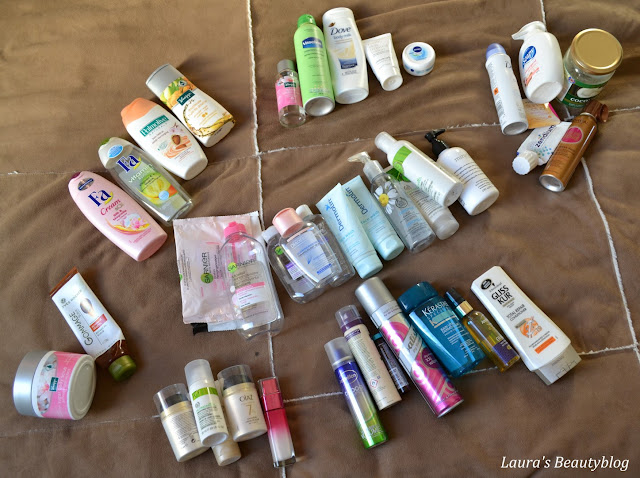 Before moving I threw out all of my empties that I collected since almost the beginning of this year. I say 'almost' because last year I posted an article about empties I collected every 3 months, but this year I felt like not doing that so for the first one or two months I just threw them straight into the bin but suddenly I collected them again so here's what I finished up over the last eight months or so. 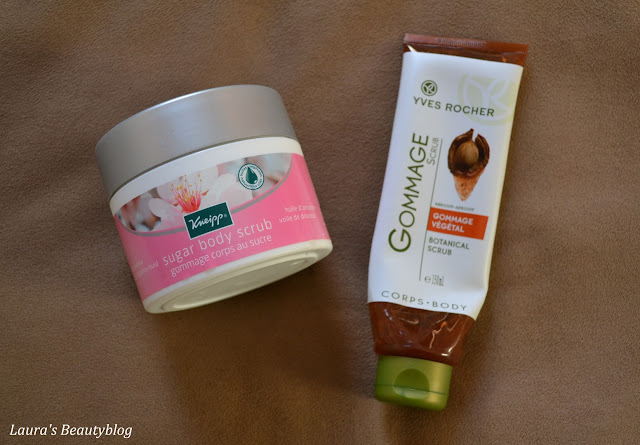 The sugar scrub from Kneipp is a really nice one. It's a really strong scrub with oil mixed in it so your skin gets scrubbed really well but is also taken care of. The botanical scrub from Yves Rocher is more of a body polish. It's okay but it's a lot softer than the one from Kneipp. This tube was finished a bit too quickly but I enjoyed the apricot smell of it that stayed in my bath room for a long time after each use. 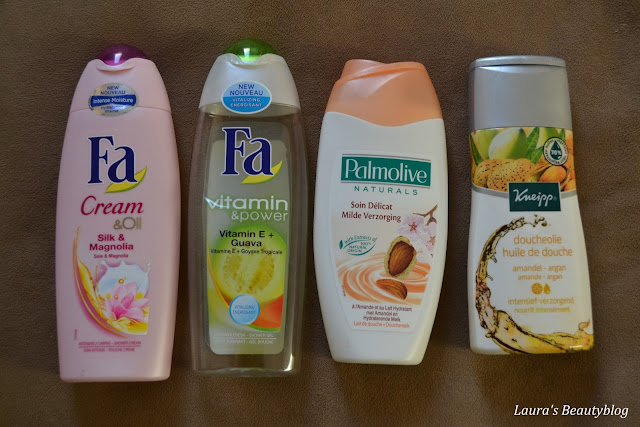 From the shower gels I like the vitamin&power shower gel by Fa the most. It's refreshing but soft to the skin. The cream&oil by Fa is fine but a bit too perfumed for my liking. The Palmolive naturals shower gel with almond oil is the second best to me out of all of these. It's soft and nourishing. The shower oil from Kneipp has almond and argan oil in it and wasn't the best one for the time that I used it (summer) but I might buy it again for winter time. 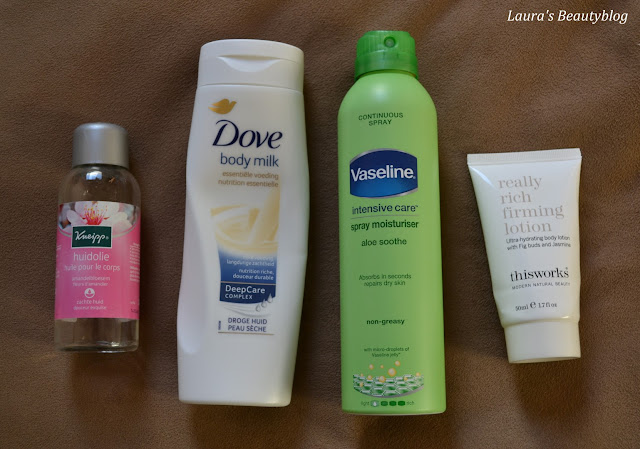 The 'huidolie' by Kneipp is a body oil. I liked using it on my legs as I found it just a bit to oily to use all over my body. The deep care complex body milk by Dove was a nice one too. I like the soft smell and the hydration level it provides. I used this all over my body and it hydrates very well while being absorbed quickly into the skin too. The aloe soothe spray moisturiser by Vaseline is my favorite moisturizer during summer so that was the period I used this one. The last one of the bunch is the really rich firming lotion by thisworks. I got this mini as a UK magazine gift. This one smells to lavender and I personally like that. I used it on the upper part of my legs and bum and it's really moisturizing and I believe (maybe I just one to because of the brand name) it it firming for real. If it wasn't so hard to get over here I would probably buy it again. 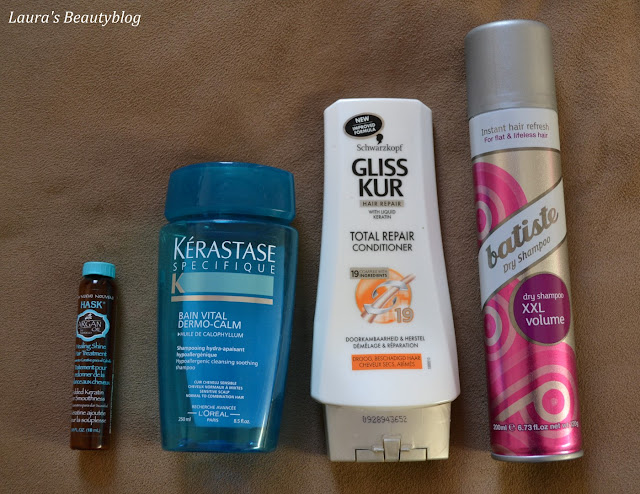 Hair stuff...! The Hask argan oil healing shine hair treatment has become a new favorite of mine! I bought this one in the USA. It's the first hair serum I really really like. So I was pleasantly surprised to find this serum at Primark in The Netherlands. I bought two more there. This serum makes my hair smoother and shinier and it smells like fresh oranges (no perfume, there's actual citrus oil in it). The bain vital dermo-calm shampoo by Kérastase supposed to calm down my sensitive irritated scalp according to a hair dresser whichs sold it to me. I was disappointed as it gave me zero result. It acted just as a regular shampoo for me but it's way overpriced for that so I'll never buy it again. The total repair conditioner by Gliss Kur did not do that much either for my hair. I like the hair mask from this range a lot better, but I feel no difference at my hair after using this conditioner. The XXL volume dry shampoo by Batiste does the trick and makes shine and greasiness disappear as well as giving volume to the hair. It's nice but it makes my scalp itchy as most dry shampoos unfortunately tend to do so I'm done with dry shampoos now. 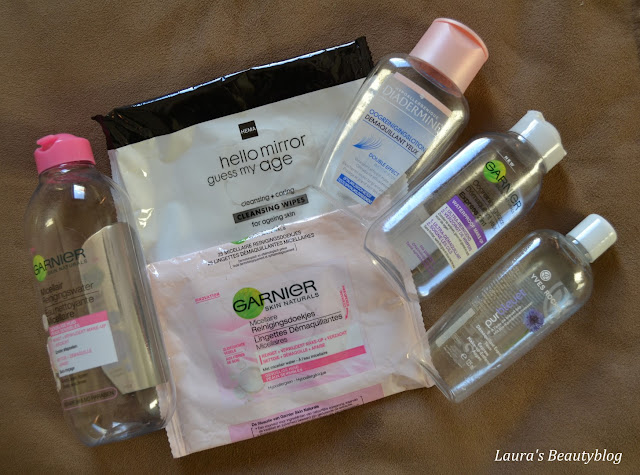 I'm not gonna discuss these make up removing products one by one. They are all fine to me. I like the micellar water by Garnier a lot. I have bought that again a few times already. I use it at night time to get rid of my face make up before washing my face with a cleanser and water. From the eye make up removers at the right the one from Diadermine is and always has been my all time favorite! 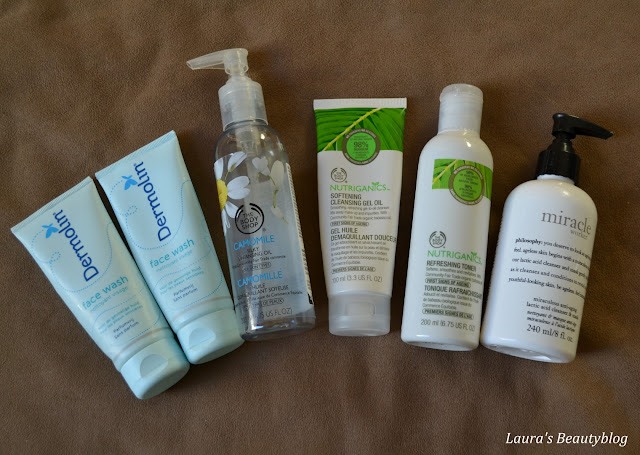 The face washes by Dermolin are very gentle to the skin so I like them. They cleanse in a non-irritating way. The camomile silky cleaning oil from The Body Shop deeply cleanses the skin and frees it completely of all make-up. I keep it still in mind to buy again one day. The nutriganics softening cleansing gel oil from The Body Shop is the same type of product. This one is just a bit milkier than the camomile cleansing oil. I liked using it in combination with a facial brush. Then a bad one; I detest the nutriganics refreshing toner from The Body Shop. The smell is so medicinal and I feel like this one also irritates my skin a bit. The only toner I ever really liked is the mild clarifying lotion by Clinique so I'm back on using that one. The miraculous anti-aging lactic acid cleanser & mask by Philosophy is nothing special to me so I would say it's not worth the money. I used it as a face wash, never really as a mask. The pump clogs up all the time which is really annoying. I wouldn't buy it again. I prefer the microdelivery micro-massage exfoliating wash from Philosophy that I used in the past over this one because it's a more effective cleanser/exfoliator on my skin. 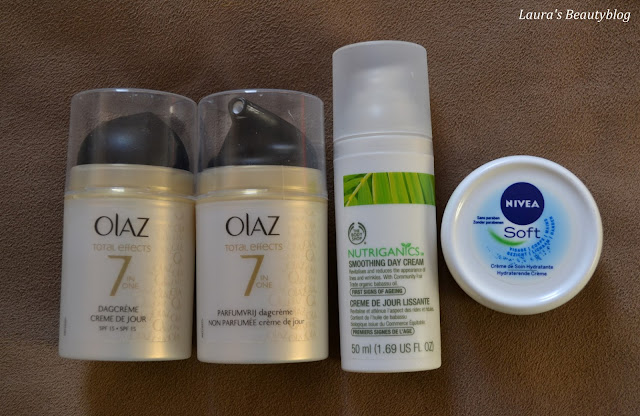 First I bought the regular total effects 7 in one day cream by Olaz (called Olay in English speaking countries) but that one has perfume in it so later on I bought the perfume free one. I used both and they are fine to me, but nothing I'm overexciting about. The perfume free one is approved by Jetkse Ultee, a research physician in cosmetic dermatology (like the Dutch Paula Begoun or so). The nutriganics soothing day cream from The Body Shop did not impress me much. I finished it but I felt somehow happy when the container was finally empty. It has to do with the consistency and the smell that I both didn't like too much. Nivea soft is a life saver to me! I'll always have it near my bed to moisturize my hands or feet and sometimes, e.g. on holiday, I use it as a night cream on my face as well. I like the small container and I buy a new one every time I run out of it. 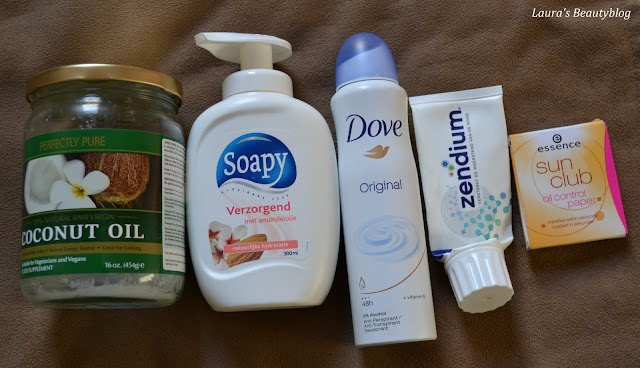 I use coconut oil as a natural scalp and hair mask once a week. It took me more than a year to finish this jar! The Soapy thing is just a hand soap. I have a liquid hand soap at every sink in my home but this is the only one I kept to show you. The original deodorant from Dove is one of my all time favorites. On week days I use Secret outlast stick deodorant but in the weekends I use this one by Dove that smells like fresh linen. It's just a bit lighter, less agressive I guess , than the Secret deodorant that I don't want to use all the time. Another one of my favorites is Zendium tooth paste. My mouth is sensitive and this ones works best for that because it is not irritating. There is always some oil control paper in my work bag to fight a shiny nose mid day. I always buy the ones from Essence or Catrice. 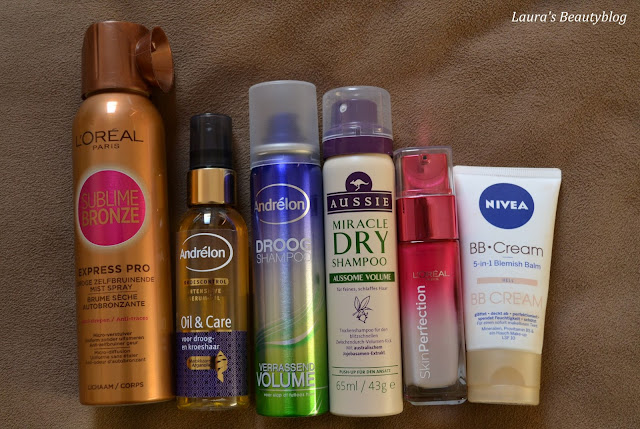 These ones you see here are actually throw outs. I did not finish any of these products. Fake tanning products are just not doing it for me. I should (have) know(n) that by now. I tried this Sublime Bronze spray by L'Oréal in many ways but I never got it to work. Also, the color looked so weird and fake on me that even when I would had been able to get a stroke free application it would look horrendously. No more fake tans for me! The oil&care hair serum by Andrélon was not that bad but since I started using the argan oil healing shine hair treatment by Hask I never reached for the Andrélon one again. I also got rid of the dry shampoos by Andrélon and Aussie because they irritated my scalp too much and made it feel itchy. The skin perfection serum by L'Oréal didn't do anything for my skin so I only finished it up half way and then decided it was totally useless to continue with it. The BB cream by Nivea was too dark after all and if I did not blend it perfectly over my jaw line you could notice. I decided to toss it. 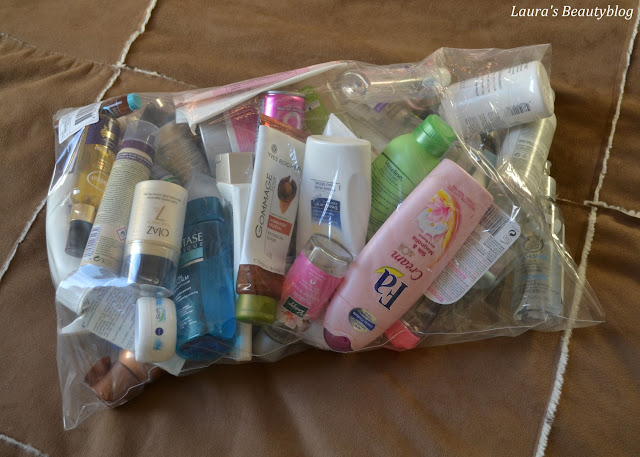